Why You Should Microchip Your Dog 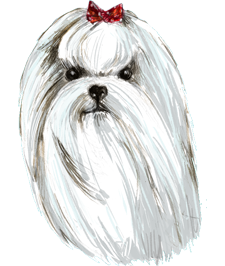 Bonjour my lovelies! Did you know that about 10 million dogs and cats go missing every year, according to the American Humane Society? And that one in three pets will go missing at some point during their life? That’s a lot!

But we live in an age of technology that can help owners connect with their lost pets, thanks to the microchip.

How a Dog Microchip Works

A microchip is tiny – smaller than a grain of rice! – and is implanted under your dog’s skin via injection, typically in between the shoulder blades. A microchip scanner has to be used to pick up the microchip’s signal and read the information on it.

Many dogs that are adopted from shelters or adopted off the track, like our friend Beckley the greyhound, already have microchips implanted by the time they find their forever home. If you have a rescue, it’s possible your dog already has a microchip.

A Microchip Must Be Registered

What information is on the microchip? It doesn’t contain your dog’s name, date of birth, your name, contact information, or anything like that. Instead, the microchip has a registration number that’s unique to your pet. The person who scans it can then look up that number in a database to link it to your information – as long as it’s registered!

The microchip has to be registered with your information, otherwise it’s can’t be used to connect you and your pet. Sadly, over 40% of pets with microchips can’t be found in a database, according to the Journal of American Veterinary Medical Association, because they’re not registered.

You Don’t Have to Pay Annually to Register Your Microchip

Some manufacturers charge an annual fee for you to keep your registration up to date, but you don’t have to pay to have your chip registered! You can register your microchip for free with a number of free databases. Do an internet search and you’ll find several that charge no fee.

A Microchip is Not the Same as GPS

Although it’s used to find lost pets, a microchip is not a GPS device. So you can’t, say, track your dog or cat in real time on your phone as they move! It only works after a dog has been found and taken to a place (vet’s office, animal shelter, or animal hospital) where the microchip can be scanned to retrieve the information.

Though 52% and 39% may not seem that high, remember that microchips MUST BE REGISTERED and up to date so the information they contain actually connects the pet back to the owner. If all microchips were current, those numbers would be higher.

Time to Get a Microchip!

Getting your pet microchipped costs around $50 and can be done by most veterinarians. It’s quick, it lasts a lifetime, and it works, so what are you waiting for?


Moxie the Maltese has gorgeous, silky white tresses—and more than a little attitude! This classy lady likes to travel the world with her owner, Penelope.